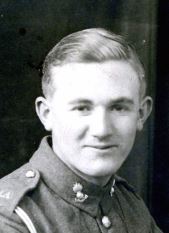 Eric Arnold was born on 19th August 1919 in Thame to William John Arnold and Edith Harriet (née Castle) of 26 Nelson Street, where they were all still living at the time of the 1939 Register.

He was educated at Lord Williams’s Grammar School, Thame and on leaving was employed in the service accounts department of Morris Motors Ltd at Cowley, Oxford. He was a member of the Morris Motors rugby club and played football on several occasions locally.

At the outbreak of the war Eric was with the 80th Heavy Anti-Aircraft Regiment, a Territorial Unit of the Royal Artillery. They went to France in 1939 with the British Expeditionary Force and Eric was later evacuated at Dunkirk.

Eric served with 194 Battery during the Battle of Britain and the Blitz, before they were sent to North Africa. On 12th December 1942 the section in which he was serving was under shell fire from the enemy and given orders to disperse in order to avoid casualties. Subsequently they received a further order to return to the gun position as the section was going out of action.

Sergeant Arnold then started out, together with three of his detachment, to return to their guns. On the way one soldier was slightly wounded and Eric continued alone, leaving the wounded soldier in the care of the others, Although an extensive search was made at the time, he was not seen again and no further news was received concerning him.

It was not until January 1944 that Eric, age 23, was declared dead, killed in action.

1446181 Sergeant Eric Arnold, Royal Artillery, has no known grave and is commemorated on Medjez-el-Bab Memorial, Tunisia. He is remembered in Thame on the War Memorial and on a memorial on his parents’ grave in St Mary’s
churchyard. 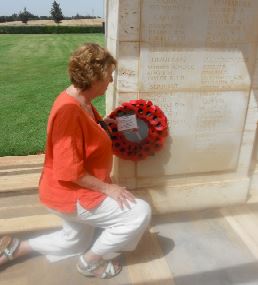