Ralph Wentworth Stone was born in the only son of the late Lt. Col. Robert Warner Stone, former commander of the 2nd Battalion South Staffordshire Regiment, and Lucie Alleyne Stone. The lived in the Manor House at Long Crendon, Buckinghamshire, and Ralph was baptised in St Mary’s Church, Long Crendon on 12th February 1890. His father died when he was two years old.

In 1901 Ralph was a boarding pupil at the Royal Naval School in Crofton, near Titchfield, Hampshire, a boys preparatory school, before moving on to Lord Williams’s Grammar School in Thame.

At the age of 18, it would seem that Ralph wanted to seek his fortune, leaving England in December 1907 on the S.S. Corinthic, bound for Wellington, New Zealand. He returned in January 1915 on the S.S. Mongolia, after spending time in the Malay States as a rubber planter.

Just three months later, on the 10th April 1915, Ralph embarked for East Africa with the 25th Battalion Royal Fusiliers, arriving in Mombasa on the 4th May. The battalion was part of the force to defend British Colonies from attacks from the nearby German colonial territories. After suffering many casualties, due to both fighting and disease, the battalion returned to England at the end of 1917.

Ralph was subsequently posted to, first the 17th Battalion, and then to the 4th Battalion, both of which were serving in France, and were engaged in the German spring offensive, and then the big allied counter attack and breakout from the stalemate of trench warfare.

Private G/15124 was killed in action on 8th October 1918, during the Second Battle of Cambrai. He was 28 years old and was buried in La Targette British Cemetery, before being re-interred in 1923 when the cemetery was closed down, into his final resting place in the Forenville Military Cemetery, Nord, France.

The Thame Remembers Cross was delivered to Forenville Military Cemetery, Nord, France
on
12th May 2015
by Jon Cooke (Old Tamensian) 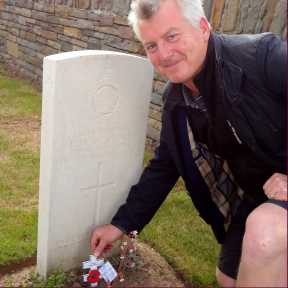