Alfred Willis was born in Thame 1886, to William Willis, a maltster and Harriett Willis (nee Grainger).  He was one of six children and was baptised in St Mary’s Church at Thame, on the 1st July 1886, but by 1891 the family had moved to Bicester, Oxfordshire.

By 1901 they had moved to Brackley, Northamptonshire.  Alfred married Elizabeth Viccars in Buckingham on 29 April 1908, and a son William John Willis was born in 1910.

Alfred was employed as a gardener in Brackley when he was called up in November 1916.  Initially, he was posted to the Army Service Corps followed by various Training Reserve Battalions, until in August 1917 he was posted to the 1/8th Battalion Durham Light Infantry, who were serving in France with the 151st Brigade of the 50th (Northumbrian) Division.

He was wounded in March 1918, receiving a gunshot wound to his right thigh during Operation Michael, the German spring offensive on the Somme.  He was evacuated to England on the hospital ship HMHS Aberdonian, but by August 1918 was sufficiently recovered to be able to return to France, this time to the 18th Battalion.  However, he was almost immediately reposted to the 15th Battalion at Simencourt near Arras, arriving on the 30th August.

Private Alfred Willis was killed on 8th October 1918 in the attack at Angles Chateaux, one of 51 men of the battalion who were killed during the 2nd Battle of Cambrai.

44155 Private Alfred Willis, Durham Light Infantry, is buried in Bois-des-Angles British Cemetery, Crevecoeur-Sur-L’escaut, France.  He is commemorated on the Brackley war memorial and his name is to be added to Thame war memorial.

The Thame Remembers Cross was delivered to Bois-des-Angles British Cemetery, Nord, France
on
22nd May 2016
by Margaret Bretherton (Thame Remembers) 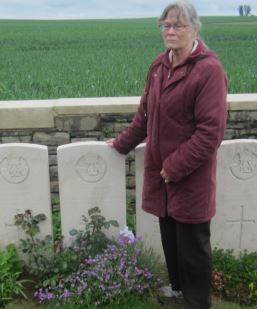