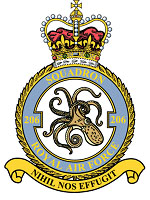 Derek Edmund Teden was born on 19 Jul 1916 in Highgate, London, England, the son of Frank and Zilla Teden. He was educated at Lord Williams’s School in Thame and at Taunton School. Derek Teden played rugby for Richmond and represented England three times against Wales, Scotland and Ireland.

He joined the Auxiliary RAF in 1938 and was mobilised in 1940, when war broke out. On October 15th 1940 Teden was serving with 206 Sqn, and his crew took off in a Lockheed Hudson to carry out a North Sea patrol. This was essentially a reconnaissance mission over the North Sea to give early warning of any seaborne invasion. The operational plan was to be on station by 23.00 hrs, fly two figure of eight pattern circuits and then return to their base.

Teden, his aircraft and crew were never seen again, despite a concerted search over their operational area the following day. Their fate is unknown and may have been due to mechanical failure rather than enemy action, but it was considered most likely that they encountered a German night fighter patrol and were shot down. At the time Derek Teden was just twenty four years old.

He is commemorated at Runnymede Air Forces Memorial and is remembered in Thame on the Lord Williams’s School Memorial Board.

Derek played rugby for Taunton school old boys and was discovered by Richmond in a match between the two teams. A live wire prop Teden was invited to move his allegiance to the London club where his form soon began to move him through both the ranks of the Richmond club and those of English rugby. By 1937 Teden was playing for Middlesex and was further selected as a reserve for England’s match against Ireland. He also came to the attention of the Barbarians’ selectors and pulled on the famous black and white hoops for the first time in March 1937.

Teden eventually made his breakthrough into the full England side on January 21st 1939 when he received the call from the selectors to take on Wales at Twickenham. Played in a sea of mud the treacherous conditions defeated the Welsh backs in a match that was to be decided by the opposing packs. The Welsh made a great battle of the game but were comprehensively outplayed upfront. England had most of the play and it was generally accepted that in better conditions would have won by a far greater margin than the final three points to nil score line. For Teden it was to be a dream start to his international career, scoring the only try of the match and as The Times put it, “what greater honour could have befallen a new front row man like D. E. Teden than to join in such a scrummaging triumph.”

After such a debut Teden’s place in the England side was never in doubt and he was to play in both of the remaining matches of the season. Returning to Twickenham, on February 11th England next took on the Irish.

The Irish, with a better balanced team that was both agile and canny, outplayed an English side that was quite simply not good enough on the day. The English pack, generally regarded as the best out of the four home unions, had trouble holding its own, whilst their backs folded under the pressure that they faced. Teden himself had a good game tackling well and having another try disallowed, but in the final analysis Ireland were worthy of their five points to nil victory.

England ’s final match of the 1939 campaign involved travelling to Murrayfield to take on Scotland, the previous season’s champions, on March 18th. Rain before play was expected to favour the English, although few expected the complete ascendancy that their pack were to show as they overcame the debacle of the Ireland match. Such was their hold on the game that the Scottish backs were hardly to see the ball, although this was offset by the underperformance of the opposing English back line.

Despite their dominance throughout the match the English pack seemed content to pass the ball to their backs, who continually squandered their chances, rather than play it themselves and at the end of play England’s nine point to six victory was thanks to a number of successful kicks rather than the tries that should have been scored.

The following month Teden again joined the Barbarians, this time for their Easter tour to Wales, beating Cardiff by eleven points to six on April 8th and losing by twelve points to three two days later. Although he would finish the season with Richmond and would turn out a few times for Rosslyn Park and in charity matches after the outbreak of war, Teden’s all too short rugby career was now essentially over. 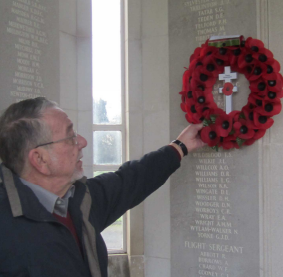