John Clare Hoadley was born in Port of Spain Trinidad West Indies in 1895, one of five children of John and Miriam Elizabeth Hoadley. He boarded at Lord Williams’s Grammar School, Thame from 1906 to 1911. By this time his father had died and the family were living in Ealing, Middlesex.

In June 1914 he was appointed as an examiner in the Exchequer and Audit Department office in London, with a salary of £100 per annum.

John joined the Royal Engineers in 1915. His service number 106153 was one of those allocated to the new Special Companies being set up for chemical warfare. Posted to France on the 13th July 1915, this would likely have been to the Depot at Helfaut, where the first 2 companies, the 186th and 187th were being formed up.

In early 1916 the special companies were re-organised into the Special Brigade, and John, with the rank of Chemical Corporal was enrolled into the 1st Battalion which handled gas discharge from cylinders.

By the end of May, the battalion was allocated to the Fourth Army, the primary British Army for the Battle of the Somme. On the24th August 1916, in the northern sector of the battlefield, John and a colleague were going up the trenches to superintend some work there.

John was killed instantaneously on the bursting of a German shell. He was one of a number from the battalion killed
that day, all buried alongside each other in Sailly-au-Bois Cemetery, Pas de Calais, France.

In his will he left over £293 to his sister Elsie Margaret Hoadley being named as the administrator.

In Thame, Chemical Corporal John Clare Hoadley is commemorated on the Lord Williams’s School Memorial Board, alongside his younger brother, William Cecil Hoadley, another former pupil of the school, and killed in 1918 whilst serving in the Royal Navy. John is also commemorated on the Port of Spain Cenotaph, Trinidad and on the memorial board of the Exchequer and Audit Department in London. 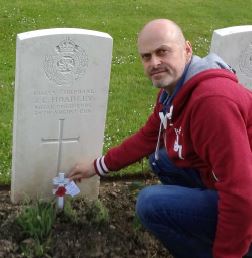