Herbert Edward Jones was born in January 1917, the fifth of six children by Edward, a railwayman, and Jane, a dressmaker, originally from Oswestry in Shropshire. The family moved firstly to Bristol, and then to Watcombe Road, Watlington in 1916.

Herbert became a pupil at Lord Williams’s School in Sept 1931 and his school career appears to have been distinguished if not outstanding, becoming a House Prefect, member of the 1st XV Rugby Team and Vice Captain of the 1st XI Cricket Team.

By Dec 1934 he is described as a ‘student teacher’ before embarking on a two year teacher training course at Culham College, qualifying in 1937 and taking up his first teaching post at a school in Wembley.

Herbert joined the Territorials in 1938 and was mobilised at the outbreak of war, ending up in 363 Battery, 111th Light Anti-Aircraft Regiment, R A, stationed at Cubbington, near Leamington Spa. There was sporadic German bombing of the industrial heartland of Birmingham, Coventry and the Black Country in July and August 1942 so it is very likely that he saw action during that period.

On the morning of Sat 12th Dec 1942, age 25, Herbert let himself into the armoury, locked the door behind him, and put a rifle to his head. The Coroner recorded a verdict of ‘suicide while the balance of his mind was disturbed’.

He is buried in St Leonard’s Churchyard, Watlington and remembered in Thame on the War Memorial at Lord Williams’s School. 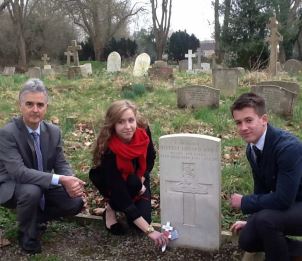