James was born on 5th May 1889 to Joseph, a mill and foundry furnisher, and Hannah Greenhalgh of Timperley. He was educated at St. George the Martyr’s School and the Bolton Church Institute.

He entered Manchester University in 1907, prior to which he was a student teacher at St. James’ School, Gorton. He gained a BA in 1910, a Teachers Certificate Class II in 1910, and an M.A. in Philology in 1912. He was a member of the Officer Training Corps from November 1908 to September 1911.

Being on the Reserve of Officers he was gazetted 2nd Lieutenant to the 1st Battalion Cheshire Regiment on 6th Aug 1914. He left for France on 7th September 1914 and saw action at the Battle of the Aisne, La Bassee, Festubert and Violannes.

On the 19th October 1914 his Captain was wounded and Greenhalgh took charge, driving the Germans out of their position, but unable to hold it he and his men retired to their own trenches, collecting the wounded on the way. Three days later he was wounded and died. 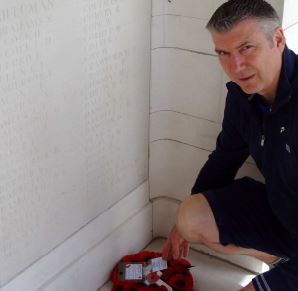